KUALA LUMPUR: The Enhanced Franchise Development Programme (EFDP), launched under the 11th Malaysia Plan, could be the catalyst to establish Malaysia as a franchise hub in Southeast Asia.

Domestic Trade, Cooperatives and Consumerism Ministry secretary-general Datuk Seri Jamil Salleh said the objective of the programme is to support local franchise brands in offering opportunities in the global market.

It among others provides financial assistance to franchisors to register intellectual property rights and obtain agreements abroad.

“I believe that this initiative can be a catalyst to establish Malaysia as a franchise hub in Southeast Asia. We cannot deny the potential provided by the global market, what more in this era of globalisation,” he said at the opening of the Franchise International Malaysia exhibition and conference at the Putra World Trade Centre, here.

He further drew on the Malaysian franchising system which had been growing rapidly over the years as it was driven by the potential in the domestic market.

Jamil said this potential had been relatively untapped as the share of the retail business conducted through franchising was still small.

“Malaysia is on the radar of franchisors but there is still substantial opportunities for growth. Franchisers must have well prepared strategies prior to entering the market,” he said.

Under Franchise Malaysia Goes Global (FMGG) in 2016, the ministry is also organising a trade mission focusing on Asian nations.He said the ministry would also be organising an interview session to mark the three-day event, ending tomorrow.

The session, in collaboration with JobsMalaysia under the Human Resources Ministry, is to address the difficulty faced by franchisors in recruiting local employees.

He said that those who have a system in place could venture into multi-unit franchise, where franchisees need to set up innovative structures to manage multiple units.

This in some cases could include in-house management, training and administration units which serve as mini support centres to their stores.

Jamil said this enhances the economics of scales by reeling in more customers, sales as well as profit.

There are 813 franchise registered with the ministry so far.The food and beverage industry makes up 39 per cent of the total number or the largest share, followed by learning centres and nurseries (11 per cent).

Jamil said that the government has been organising numerous trade missions and promotional exhibitions to support homegrown franchise players.

So far 61 Malaysian franchise brands have penetrated more than 55 nations while reaching 2,463 outlets.

Jamil said that agencies such as Malaysia External Trade Development (MATRADE) were roped in to formulate strategies in expanding the market for homegrown franchisers.

“I believe the government has put in place all necessary foundation to develop the nation’s franchise industry.

“Therefore it is crucial for the ministry to spearhead the development of the franchise industry with all related players such as the Malaysian Franchise Association (MFA), franchisors, franchisees and supporting institutions to give their full support and commitment in realising the government’s aspiration of becoming Southeast Asia’s franchise hub by 2020,” he added. 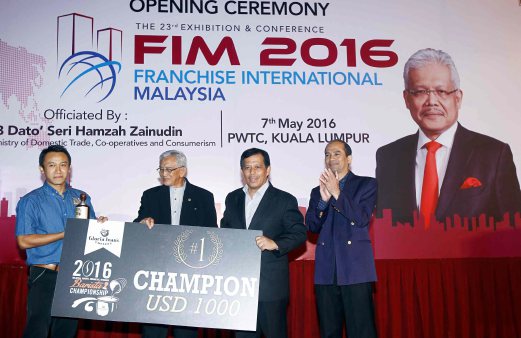